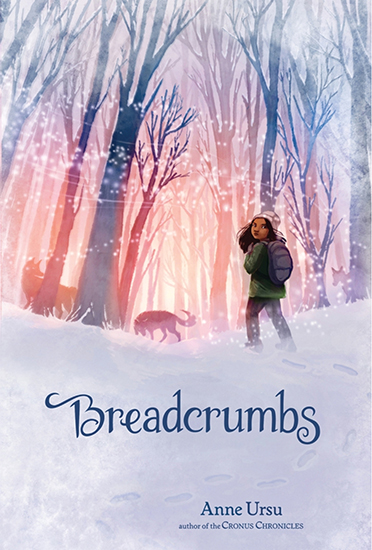 Once upon a time, Hazel and Jack were best friends. But that was before he stopped talking to her and disappeared into a forest with a mysterious woman made of ice. Now it’s up to Hazel to go in after him. Inspired by Hans Christian Andersen’s “The Snow Queen,” Breadcrumbs is a stunningly original fairy tale of modern-day America, a dazzling ode to the power of fantasy, and a heartbreaking meditation on how growing up is as much a choice as it is something that happens to us.

In Breadcrumbs, Anne Ursu tells, in her one-of-a-kind voice, a story that brings together fifty years of children’s literature in a tale as modern as it is timeless. Hazel’s journey to come to terms with her evolving friendship with Jack will deeply resonate with young readers.

The winner of numerous awards and recipient of four starred reviews, Anne Ursu’s Breadcrumbs is a stunning and heartbreaking story of growing up, wrapped in a modern-day fairy tale.

Read a sample!Download the Teacher's Guide

Devastatingly brilliant and beautiful…Ursu has sculpted a rich and poignant adventure that brings readers deep into the mysterious, magical, and sometimes frightening forests of childhood and change. Breadcrumbs is one of those rare novels that turned me on my head then sat on my heart and refused to budge.
—Ingrid Law, Newbery Honor-winning author of Savvy
Like a fairy-tale heroine, Hazel traverses the woods without a breadcrumb trail to save a boy who may not want to be saved in this multi-layered, artfully crafted, transforming testament to the power of friendship.
—Kirkus Reviews, starred review

The creepy fantasyland that Hazel traverses uses bits from other Andersen tales to create a story that… is beautifully written and wholly original. It’s certainly the only children’s fantasy around where Minnesota Twins All-Star catcher Joe Mauer figures into the plot.
—Publishers Weekly, starred review

… references to both classic and modern fantasy tales, showing that all are related. The underlying theme of friendship that is constant and true, sacrifice, and choosing reality over fantasy is beautifully written.
—School Library Journal, starred review